The "Mimoyecques Fortress" is one of the most impressive buildings designed by Hitler (120,000 m3 of poured concrete). This secret base, located a few kilometres from Cape Gris-Nez, in Landrethun-le-Nord, at a place called "Mimoyecques" was to be used for the installation of the large underground canon V3.

Like all the V weapons (Vergelstungwaffen: weapons of retaliation), the V3 was planned to bomb England, and more specifically London. The site was struck by the Royal Air Force with giant Tallboy bombs, which put an end to a serious threat to Londoners on 6 July, 1944. 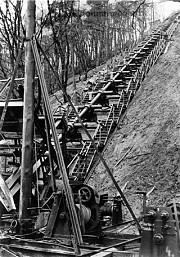 Prototype of a Hillersleben multiple charge gun, end of 1943