Waiting for the landings

At the end of 1942, the most impressive work had begun along the coastline of Pas-de-Calais to build the "Atlantic Wall", with which Hitler hoped to prevent an Anglo-American landing in Europe:

Defence network installed by the Germans on a beach in Pas-de-Calais.

Mined obstacles were placed on the beaches; bunkers housing cannons and machine guns were built on the coast and batteries of cannons were installed. The ports of Dunkirk, Calais and Boulogne were transformed into fortresses. Everyone, both the Germans and the inhabitants of Nord-Pas-de-Calais, was convinced that the Allies would land near Calais. 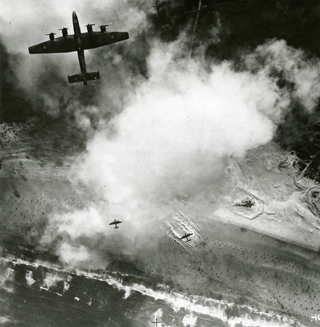 American bomber during an attack on an aerodrome in Northern France (1944).

From 1943 the intensification of the Allied bombings seemed to confirm this assumption. There were numerous targets in the region: coastal fortifications, giant bunkers designed for the new weapons, factories working for Germany and marshalling yards.

From April 1944, the attacks were almost daily; some causing great bloodshed among civilians: 500 people were killed in Lille on Easter Day.

The population’s fears were reinforced by the massacre committed in Ascq, near Lille, by a unit of the SS Hitlerjugend division (86 deaths), on 1 April 1944