The difficulties of daily life

The population felt the constraints of a shortage economy: feeding and keeping themselves warm became an obsession.

German levies, smuggling to Belgium and the black market – prices were higher in the Nord-Pas-de-Calais due to the presence of so many occupying troops – made the rationing system ineffective.

The situation was particularly difficult for urban working-class families who had no garden in which to grow crops.

Women played a vital role in collective survival; the absence of a large number of men, who were held prisoner in Germany, meant that they had to take on ever growing important responsibilities in economic and social life. 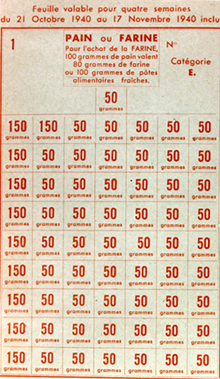