The Allied landings in Normandy, on 6 June 1944, were received with relief.

The campaign to bomb London with German V1 rockets from launching sites located in Pas-de-Calais began on 13 June. The Resistance multiplied its acts of sabotage. The Germans responded with executions and deportation. On 1 September, when the Allied troops were close, a final convoy, the "train from Loos", took 870 men to the camps of the Reich.

Most of Nord and Pas-de-Calais were liberated in five days (from 1 to 5 September 1944) by British, American, Canadian and Polish troops. However, the Canadians had to engage in very heavy fighting before they were able to seize the pockets of German resistance on the coast (Boulogne, Cap Gris-Nez, Calais) at the end of September. Dunkirk remained under siege until 9 May 1945 and was the last French town to be liberated. 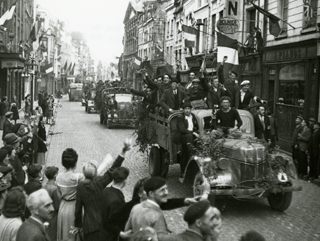 March of Resistance fighters during the liberation of Arras (2 September 1944). 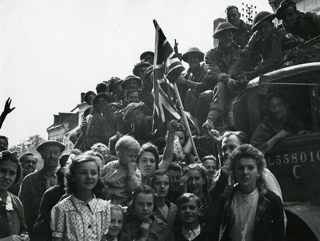 Republican law was rapidly re-established. Purging, carried out in accordance with a legal framework, was moderate, which provoked frustration among the public. Like in 1918, the two northern departments were among those that had suffered the most destruction. As had been the case twenty years earlier, Reconstruction was carried out very quickly. However, Nord-Pas-de-Calais, affected by the crisis in its traditional industries (mining, metallurgy, textiles), did not fully experience the "30 glorious years" of the French economy.