Because of its geographical closeness to England, the Nazis’ toughest enemy, Nord-Pas-de-Calais was placed in an occupation zone.

The German military presence was much greater here than in the rest of the French territory. This was especially true in the summer of 1940, during the preparations for a landing in Great Britain, which never took place, and in 1943-1944, when the Pas-de-Calais coastline became the most powerful zone in the "Atlantic Wall". Everybody was namely waiting for the Allies to land on this spot.

This massive presence of troops resulted in an enormous number of requisitions (lodgings, horses, forage, etc.), as well as bullying. The living conditions of the civilian population in the "red zone", demarcated along the coast, were particularly difficult.

The occupying forces methodically pillaged land and industrial resources. The majority of metallurgical, chemical and textile production was exported to Germany 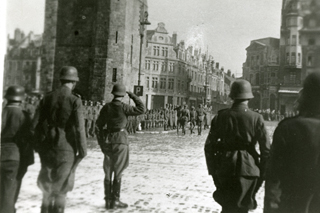 However, it was the pillaging of manpower that was felt the hardest: razzias for workers, which started at the end of 1940, labour on Todt Organisation construction sites and the implementation of STO (obligatory work service) forced thousands of young people to go to Germany.