To calibrate the atomic explosion measuring instruments, a test with 108 tonnes of TNT was carried out on 7 May 1945.

The first atomic bomb in history exploded on the Trinity site on 12 July 1945, at 5.30 am. This bomb released energy equivalent to the explosion of about 20,000 tonnes (20 kt) of TNT. The mushroom cloud rose to an altitude of 12 km.

This huge explosion made the scientists realise that they had manufactured the most frightful device of the Second World War and many of them would try to prevent its use. Alas, the politicians and the military, for various reasons, would continue to launch these bombs on two Japanese cities: Hiroshima and Nagasaki.

On 6 and 9 August, two bombs were dropped: Little Boy on Hiroshima and Fat Man on Nagasaki. They caused enormous damage and human loss (80,000 direct deaths in Hiroshima and 60,000 in Nagasaki), which prompted Japan to put an end to the war against the United States. 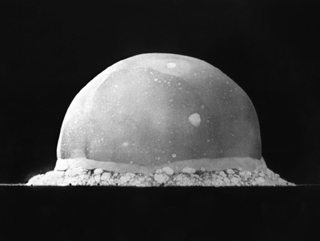