By the end of the war, Stalin, the Soviet leader, understood that by combining the German A4 rocket with the atomic bomb, the ultimate weapon could be obtained: the thermonuclear missile. Henceforth, the major powers would all want to develop this new weapon.

The balance of terror

The USSR caught up with the USA in the nuclear field from the early 1950s (A bomb in 1949, H bomb in 1953). The USSR was even ahead of the USA in the space programme, with the launch of Sputnik I in April 1957. With the rockets, the warning signs of an attack were greatly reduced (B-52 bomber: 2 to 3 hours, Soviet missiles: 30 minutes). Faced with this threat, the USA and USSR engaged in an arms race, developing the construction of nuclear submarines equipped with medium-range missiles. At the same time, the two superpowers were concerned about the proliferation of nuclear weapons: the United Kingdom (A bomb in 1951, H in 1957), France (A bomb in 1964, H in 1968), mainland China (A bomb in 1964, H bomb in 1967).

In response to the USSR, Kennedy set up a new strategy, that of "graduated response": a willingness to negotiate and dissuade before making threats. In October 1962, the USA had formal proof of the presence of missile launchers in Cuba. Kennedy issued an ultimatum to Khrushchev on 22 October. He demanded the return of boats and the dismantling of the launching sites. On 26 October, Kennedy's firmness pushed the Soviet authorities to withdraw their ships in exchange for the commitment of the USA  to never intervene in Cuba. Kennedy's principle of graduated deterrence had achieved great success. Peaceful coexistence had been established since 1963. Moreover, to avoid any misunderstandings, the USA and the USSR set up a "red phone" between the Kremlin and the White House for a rapid communication in case of an alert. 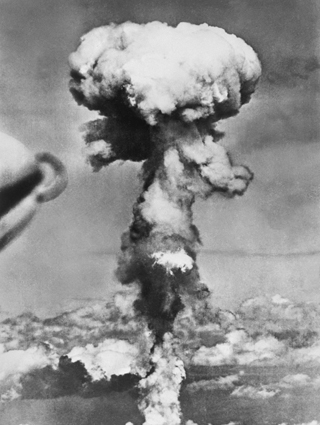