Bodies of prisoners in the Bœlcke barracks in Nordhausen, shortly after the arrival of the Americans (April 1945)

At the end of March 1945, production stopped in the underground factory

The Dora camp and its Kommandos were evacuated during the first few days of April, before the arrival of the Allied troops. Thousands of prisoners perished in the different evacuations that took place for days on end in the heart of central Germany.

On 11 April, the soldiers of the American Third Tank division discovered Dora

the underground factory, at the same time a place where thousands of prisoners had been left to die in the Bœlcke barracks, just a few kilometres away, in Nordhausen. The pictures made in these barracks were among the first to show the Western public the horror of the Nazi camps. 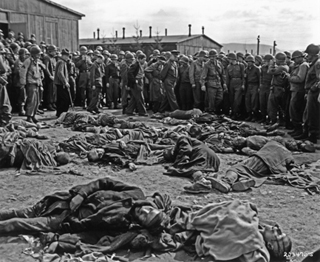 Bodies of prisoners in the Bœlcke barracks in Nordhausen, shortly after the arrival of the Americans (April 1945)