La Coupole, located within the community of Helfaut, 5 km from the town of Saint-Omer (Pas-de-Calais, France), is one of the most impressive remnants of the Second World War in Europe.

This is one of the "special constructions" (Sonderbauten) that were built on French soil by the German army, 1943-1944, to allow the implementation of new weapon systems: the flying bombs (Fi 103/V1) and rockets (A4/V2) constructed to strike England.

Launched by the Nazi regime in September 1943, the construction lasted 10 months and mobilised considerable technical and human resources. The Todt Organisation, responsible for major works under the Nazi State, entrusted the work site to a powerful German construction company: Philipp Holzmann AG.

The concrete dome was completed in January 1944. Located atop a plateau, it was designed to protect the underground work site and the room where the rockets would have been prepared to be fired (if it had been completed...).

These were massive and struck the site from January to July 1944. They frequently disrupted access to the site and thereby significantly slowed down the work. However, the dome itself, protected by its 5.5 metre thick reinforced concrete, was not damaged. When the Anglo-American troops invaded Normandy at the end of July 1944, the Germans were forced to abandon the construction site of La Coupole, just a few weeks before its scheduled completion. And thereby no V2 rocket has been able to take off from this site, which had been designed to be the first strategic missile base in History. 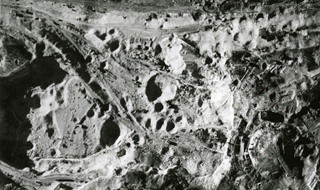 Aerial view of La Coupole, after the Allied bombings (summer 1944)

La Coupole, an incarnation of the Nazi madness

Through the strength of its concrete shape, the true labyrinth of its underground facilities and the use of forced labour for its construction, is La Coupole a site that symbolises Nazi madness: it represents a will to dominate and a total disdain for human life. The underground sites that started to appear in Germany and in the occupied countries from 1943 onwards, in response to the Allies’ control of the skies, were built with the forced labour of prisoners considered by the Nazis to be "inferior beings". This fact was confirmed on a large scale in the "Mittelwerk" underground factory. In this factory, the V2 rockets were mass produced, right in the heart of Germany, by prisoners from the Dora concentration camp. It also illustrates the visionary character of Fritz Lang’s film, "Metropolis", which described a world of slaves dominated by a "master race".  However, the Third Reich, which Hitler wanted to establish for one thousand years, collapsed in 1945.

For a peaceful Europe

The construction of a peaceful, independent Europe, undertaken at the end of the 1940s, arose from a collective reflection on the self-destructive capacities of the "old continent" that were revealed by the two world wars. This new Europe that has broken with the confrontations of the past, is now founded on a historical heritage and humanist values shared by all the people who are part of it. The memory of the "dark years" must be preserved for younger generations through clear, rigorous historical information. La Coupole has been created for this purpose and is established in an authentic and profoundly symbolic place.