Until 31 March 2017 La Coupole, Centre of History and Remembrance in the Nord–Pas-de-Calais is presenting the "Wars, Sciences and Technologies, 1914-1945" exhibition. 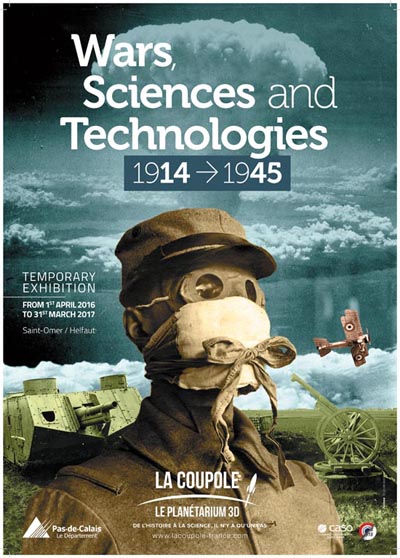 On the centenary of the Great War, La Coupole is offering you a large scale temporary exhibition entitled "Wars, Sciences and Technologies, 1914-1945".

It has received the "Mission du Centenaire" certification.

It intends to demonstrate the scientific and technological progress during the two global conflicts.

It is based around several hubs and deals with the following themes : artillery, aviation, tanks, chemical weapons, unit equipment, communications, detection, cryptography, sea warfare and medicine.

Each part is organised around photographs and a few symbolic objects : a Renault FT tank, a 75mm gun, the original glass plates of Marie Curie ...

For the occasion, a trench was reconstructed by the secondary school for vocational training of Lumbres to show the symbolic individual weapons of the Great War.

Short texts show the major developments in each of the areas shown by relying on the journeys of great scientists. Touch screen tablets allow you to gain more in depth historical and technological information.
The image is at the heart of the scenography.

For more informations about the exhibition, you can contact the educational service of La Coupole